For community service this week, the BUCKS performed the wonderful labor of sharing the Gospel with people in the Dallas-Fort Worth area. The BUCKS handed out various gospel tracts including the curved illusion cards below. People were asked which card looked bigger between the red and blue. Whichever card was on the viewer's right inevitably seemed larger and then the cards would be switched and the same would be true for the other color. People were surprised or amazed and then it was shown to them that the cards were actually the same size. After the "card trick", the point was made that human eyes are often fooled by illusions. 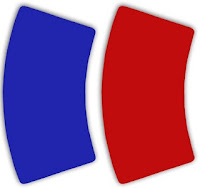 While on the topic of eyes, the person was then asked if he or she was willing to sell one eye for $1million. Some responded "Yes!" and others "No!". All were then asked if they would sell both eyes for $20million and no one was willing to do that; each person felt his/her eyes were priceless. The BUCKS then shared how the person's eye is worth nothing compared to the value of his soul (Mark 9:47). People were told..."Just as gaining riches at the expense of losing your sight is a bad trade, likewise...gaining the whole world at the cost of losing your soul [and NOT inheriting eternal life] is a bad exchange." Each person was challenged to examine whether he or she was living for self or truly living for the One (the Lord Jesus Christ) who created him or her. 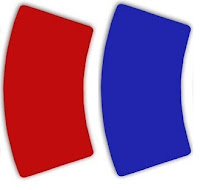 When the BUCKS were finished speaking with each person, they were typically thanked for taking out the time to share Christ's message. Finally, to reward the BUCKS for their Kingdom effort this week, the BUCKS were treated to Chick-fil-A.

This week's Lecture and Learning ended up being centered on Matthew 7. In this chapter, Jesus warns us about false prophets (7:15), exhorts us to be true followers (7:21), and tells us to build our lives upon the Rock of His Word (7:24-26). Following the message, the BUCKS played a review game to prepare them for next week's test. The BUCKS divided up into 2 teams and a member of each team was shown a Christian Command and then had to draw a picture clue to get his team members to guess it. One point was awarded to the first team to guess the Christian Command (e.g. "Let your light shine before men") and another point was awarded if that team was able to cite the reference for that Christian Command/memory verse (e.g. Matthew 5:16). 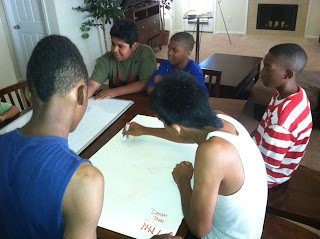 The LAFF (Learning Assignment for the Following Fellowship) is to continue studying the Christian Commands (1-15) below for Week 6's test (July 31st).

Week 4 was an "interesting" week! On paper, 9 BUCKS passed their tests and seemingly met the Learning Objective. However, it was discovered that a number of BUCKS had either... A) cheated OR B) concealed and withheld the knowledge their fellow BUCK had cheated. This discovery took place while on their Fun & Fellowship trip to the Dallas Zoo on the following day and therefore, there will be no Fun & Fellowship trip for Week 5 (July 25th). Instead, the BUCKS will have the grand "opportunity" to perform community service. From this, the BUCKS will hopefully learn:

This week's Lecture & Learning was entitled "Life and Death." The BUCKS read 1 John 3:7-13 and discussed how living for the LORD and being a "child of God" leads to eternal life, but living for one's self and being a "child of the devil" leads to destruction.
﻿﻿
As mentioned above, this week's Fun & Fellowship was a trip to the Dallas Zoo and despite the cheating ordeal, the BUCKS were treated to Burger King as a Kingdom gesture and reminder that...

"...God demonstrates His own love for us in this: While we were yet sinners, Christ died for us" - Romans 5:8 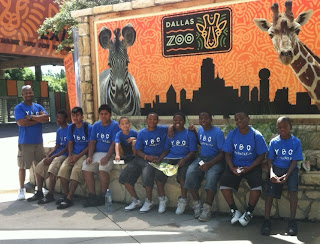 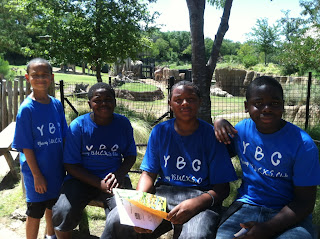 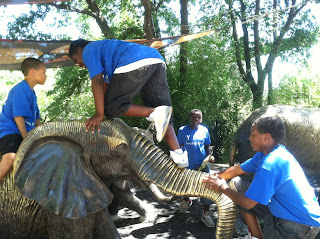 The LAFF (Learning Assignment for the Following Fellowship) is to continue studying the Christian Commands found throughout the Gospel of Matthew (listed below). Week 5's Lecture and Learning will be a lesson on all 21 commands and a "study hall" will be held for Week 6's test (Christian Commands 1-15). There will not be a test in Week 5 as there will be no Fun and Fellowship incentive trip.

Congratulations to the 8 Young BUCKS who passed this week's test and met their Learning Objective! The BUCKS had their work cut out for them as they were expected to know the first 5 Christian Commands and verse references in addition to the material from the prior weeks!

During this week's Lecture & Learning, the BUCKS watched an episode of the Way of the Master (WOTM), a weekly evangelism TV show airing on a variety of Christian networks. The BUCKS watched episode 17 of season 2 entitled True and False Conversion. This episode includes interviews with people on the street as well as Scripture on the topic including the Parable of the Sower found in Matthew 13:1-23. For more information on the show or to purchase a copy of this episode, click HERE.
﻿﻿
For this week's Fun & Fellowship, the BUCKS were taken to the Dallas Museum of Nature and Science where they got to explore hands on exhibits. For lunch this week, the BUCKS were treated to McDonald's located across the street from the museum. 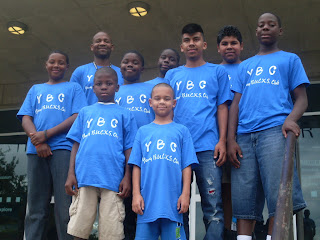 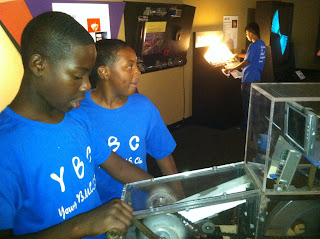 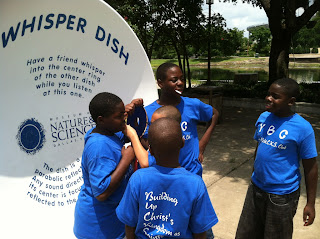 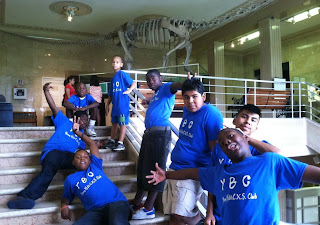 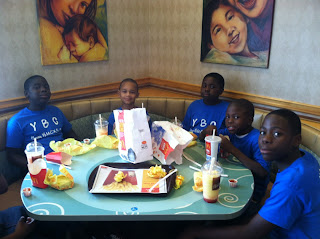 The Learning Assignment for the Following Fellowship (LAFF) is to continue studying the Christian Commands found throughout the Gospel of Matthew. For Week 4's test, members will be required to cite Christian Commands 1-10 with their corresponding chapter and verses. Each answer will be worth a total of 7 points. Again, here are 21 commands in Matthew that will be the focus and tested on over the next 5 weeks. LAFF commands are in bold:

NOTE: All Scriptural quotes and tests are based on the New International Version (NIV) of the Bible. This is merely due to the fact that the NIV was the version issued to each Young BUCK needing a copy of the Bible. Any family member or friend desiring a copy can contact the YBC (info at bottom of initial blog post) and one will also be made available to you.

Congratulations to the 9 Young BUCKS who passed this week's test with a 75% or higher and met their Learning Objective! As a bonus, the BUCKS who passed their test with a 100% were treated to a 3D showing of The Amazing Spider-Man. These BUCKS were: Alex, George, JD, Josiah, and Reginald! As a study-aid the day before their test, all of the Young BUCKS participated in a game called "Pays2Pray" where they were challenged to descramble the Lord's Prayer (line by line) and buzz in before their competitor. One penny was awarded for correctly sorting out the prayer and another for buzzing in first. Kameron was the undefeated champ with the most pennies earned and as a prize, was awarded a guaranteed seat at the new Spider-Man movie.
﻿
﻿
During this week's Lecture & Learning, the BUCKS were taught about the dangers of idolatry and the importance of staying on the narrow [but difficult] path laid out for saints in the life and teachings of Jesus Christ. Also, in light of America's Independence Day being celebrated on the 4th of July, there was a deliberate focus on the topic of freedom and the various ways it has been pursued in America's history. The BUCKS were urged to view life and choices from a global, Christian, and Kingdom standpoint as opposed to a mere American point of view. Contrasted were the non-violent Civil Rights Movement and the violent War for Independence. The BUCKS were presented video clips depicting each time period respectively and then asked challenging questions in regards to teachings found in the Bible (e.g. loving your enemies, obeying authorities, and pay taxes). The BUCKS were also made to think about things like whether murder (breaking God's 6th Commandment) is ever just.
﻿﻿

The Learning Assignment for the Following Fellowship(s) (LAFF) is to study and learn 21 Christian Commands found throughout the Gospel of Matthew. For Week 3's test, members will be required to cite the first 5 commands of Christ below and their corresponding chapter and verse. Each answer will be worth a total of 14 points (command = 7pts /reference = 7pts). Here are 21 commands in Matthew that will be focused and tested on over the next 5 weeks:

MEMBERS: Along with listing and referencing the first 5 of the Christian Commands above, 4 additional questions will be asked using material from Week 1. For 10 extra credit points, the Lord's Prayer from Week 2 can be written down in its entirety at the bottom of your test sheet.  Again, feel free to print the material posted above to make it easier to study. For anyone who cannot print, a copy will be available upon request. Additionally, an audio recording of the lecture portion of each Tuesday meeting is also available to members and parents upon request. Minimum passing score required for Week 3's test: 75% ﻿
NOTE: All Scriptural quotes and tests are based on the New International Version (NIV) of the Bible. This is merely due to the fact that the NIV was the version issued to each Young BUCK needing a copy of the Bible. Any family member or friend desiring a copy can contact the YBC (info at bottom of initial blog post) and one will also be made available to you.